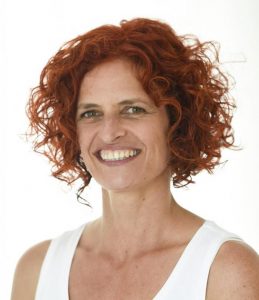 In 1993, after having finished my trainings and having just returned from a world tour (when the Sagittarius’ heart beats faster!) I started to work on an independant and free-lance basis as a sports and gymnastics instructor in the fields of fitness, workplace health promotion, prevention, trainer for autogenous training, body awareness and relaxation techniques as well as for the Thera-Band company in various areas.

Constant educations and trainings in the fields of sports therapy, relaxation techniques and body awareness made me more curious and hungry for knowledge, in particular regarding the connections between our muscles, organs and the psyche. In 1996 I graduated as a sports therapist.

Since 1996 I have been working as a performance artist „Eytna“ in Germany and abroad. As a light artist I have presented „darkness and light“ on the occasion of company events, product presentations, galas and varietés.

From 1998 until 2000 I trained as a non-medical practitioner, however, not acquiring any final qualification.

I often worked with wheelchair users and persons with physical disabilities.

In 2000 I learned about Kundalini-Yoga. To date I am fascinated and convinced by the technology, its effect and the knowledge about it. In 2003 I completed my first training as a Kundalini-Yoga instructor, level 1.

It is very important to me to bring together different people of all ages, persons with disabilities, athletes etc., as a result of which, in 2003, I developed an inclusive play and training device with the help of company Thera-Band and my partner. In addition, I conduct seminars for people with restrictions, like for example a yoga seminar for blind people. Getting in touch with so many different people within my groups means a lot to me.

In 2006 I widened my skills and knowledge by doing a training as a yoga instructor for meridian yoga.

2006: My plan was successful – my first yoga seminars for persons with disabilities were attended, some seminars for people with osteogenesis imperfecta (brittle bone disease), for blind people and people with spinal paralysis took place. My aim is to offer yoga for everybody.

In 2008 I became a training supervisor (teacher trainer) for Kundalini-Yoga level 1.

Within a small team I started to develop a yoga therapy training for yoga instructors in 2008. The team has grown ever since.

In 2009 I took a basic course in „The Therapeutic Dimension of Yoga“ by Dr. Hedwig Gupta and Ingrid Frölich.

2009: With offering regular yoga seminars for people with spinal paralysis and their partners at the Manfred-Sauer-Stiftung I made a major step.

In 2011 I planned the first yoga vacation package for people with spinal paralysis.

In 2012 I started with weekend seminars „Yoga for People with Spinal Paralysis and their Partners“ at the Paraplegiker Zentrum in Nottwil (Switzerland).

2013: Beginning of my own training courses for yoga instructors „Yoga for People with Physical Disabilities“.

2014: Beginning of the special training for yoga therapy by 3HO which we have developed for a long time.

In November 2014 I fulfilled my long-awaited dream with the first inclusive training for yoga instructors, attended by 22 pupils, including 5 wheelchair users.

My interests and curiosity will further guide me to learn and teach. It is as exciting as a trip around the world that never ends.